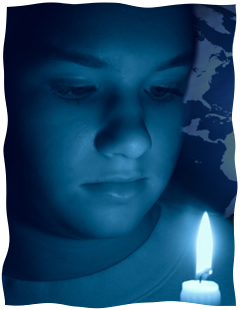 Two rabbinical students were sent under the direction of the Rebbe, Rabbi Menachem Mendel Schneerson, of righteous memory, to the faraway Aleutian Islands, with the sole purpose of bringing the joy and light of Judaism to any Jews that lived there.

A girl in the back raised her hand. “Mommy, so we’re not the only Jews in the world?!” little Stacy exclaimed to her mother/teacher.

The embarrassed mother quietly and quickly told the rabbinical students that she’d talk to them after class.

The now-revealed mother and daughter sat with the two rabbinical students that afternoon. The mother confessed that she was not very comfortable with her Judaism, or expressing it with her daughter, as they were the only Jews on this island, and it seemed easier to just put it aside. They all talked for a while, the boys offering words of warm encouragement to explore their Jewish identity. The mother bought some Jewish books and Mezuzahs. She then asked the boys to offer some words of encouragement to her daughter, as they had to her.

We’re not the only Jews in the world?The rabbinical students left the little girl with this thought: “All around the world, women and girls bring in Shabbat by lighting candles on Friday afternoon, eighteen minutes before sunset. But when they are lighting eighteen minutes before sunset, bringing in Shabbat in Australia, it is not yet Shabbat in Israel, until eight hours later, when the women there light the candles. And then seven hours later, New York lights and brings in Shabbat, and eventually California, and the entire world lights, and brings in Shabbat at different times.”

“You will also be the very last Jewish girl in the world each Friday, little Stacy, to usher in Shabbat with your Shabbat candles, completing this unifying circle.”

And with these words, the boys bid farewell to their new Jewish friends on the island.