Why was the first Passover different from all other Passovers? 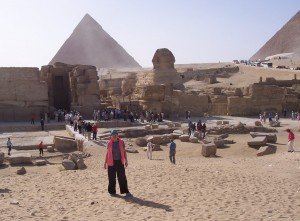 Why was the first Passover different from all other Passovers?

The Israelites’ first Passover, celebrated in Egypt just prior to the exodus and described in Exodus 12:1-11, was radically different from the Torah mandated holiday observed after the exodus.

Exodus 12, which describes the Egyptian ceremony, raises many questions. (1) Why does the Torah command that “this month,” the month of the exodus, should be “the first month of the year,” and what connection does this calendar requirement have to Passover? (2) Why did the celebration start on the tenth day of this month; why not the fourteenth when the meal was eaten? (3) Why was a lamb of the sheep or goat taken and not an ox? (4) Why did the Torah require that the lamb be consumed at home and not at a holy place or a community area? (5) Why, if the family was too small to eat the entire lamb, does the Torah say that the family should invite neighbors; why not anyone who wants to come? (6) Why does the Torah require that the lamb, which was not a sacrifice to God but a meal for humans, be “without blemish, a male of the first year”? (7) Why roast and not boil the lamb? (8) Why did the people have to kill the lamb on the fourteenth of the month at dusk? (9) Why did the Israelites need to put blood “on the two side-posts and on the lintel, upon the houses”? (10) Why did the people have to eat unleavened bread – the command was given long before the fourteenth and the people had sufficient time to bake bread with leaven? (11) Why must they eat maror, “bitter herbs”? (12) Why were they prohibited from leaving any part of the food until morning? (13) Why dress up for the eating “with your loins girded, your shoes on your feet, and your staff in your hand”?

What was the purpose of this meal?

There is one basic question underlying all these thirteen queries. Why eat this meal? Once the purpose of the meal is identified everything else falls into place.

Exodus 12 follows the narrative in Exodus 11 where the Israelites are assured that they will leave Egyptian servitude shortly. Exodus 12 describes how the Israelites should celebrate this forthcoming freedom. It is not, as most commentators assume, a commemorative event as the post-exodus Passovers came to be, but an anticipatory celebration of what will soon occur. The festivity discussed in Exodus 12 was unique to this particular year and was not repeated because it was appropriate at this time only but not subsequently.

The event must be remembered

Before describing the festive meal the Israelites were told that their impending deliverance would be so important and so meaningful that (1) they should recollect it yearly by marking the month in which their freedom occurred as the first month of the year.

A special meal should be served at home

Since the Israelites were descendants of pastoral ancestors who shepherded lambs and were probably accustomed to mark special occasions by eating them, they were told to celebrate the upcoming exodus (3) by eating their traditional festive food, the lamb, in the usual domestic, close-nit (4) family, or (5) neighborhood celebration, much like the American holiday of Thanksgiving. Slavery destroys family ties. Now this meal afforded the erstwhile slaves an opportunity to strengthen both family and neighborliness. The slaughter of the lamb also demonstrated an end of the fear that the Israelites had of killing what is sacred to the Egyptians (8:22) and this act of defiance to their masters was celebrated triumphantly and joyously.

But did slaves own lambs? Not all of the Israelites were enslaved. For example, a tradition identifies the tribe of Levi as remaining free. This tradition is supported by the Bible itself; Aaron, Moses’ brother from the tribe of Levi, was able to move about freely and even go into the wilderness to meet his brother upon his return to Egypt (4:27); some Israelites continued to live in the northern pastoral area of Goshen (8:18, 9:26) and they owned cattle (9:4-7, 10:9, 24-26); and other Israelites lived in the same neighborhood as Egyptians and were considered neighbors, not slaves (11:2). Thus, there were free Israelites who continued to posses lambs and these animals were available for the pre-exodus ceremony.

Unlike the post-exodus Pascal sacrifice, which was instituted to commemorate what had happened on this day in Egypt, this lamb was not a sacrifice. Yet, because of the significance of the event, the Israelites were told not to stint on the celebration, but to take the very best food available; (6) a lamb “without blemish, a male of the first year,” just like the sacrifices they were to offer later to God.

So, too, they were required to prepare the lamb in the most favored way, (7) roasted, not boiled. Arnold Ehrlich, in his Mikra Ki-pheshuto,points out that the ancients ate their meat roasted, not boiled, as can be seen in the Greek epic Iliad. Although the Israelites also ate boiled foods, they used the ancient roasting method to add a sense of history and awe to the practice. This is similar to Tziporah using the ancient flint to circumcise her son rather than a bronze blade which was certainly available, and our use of a Torah scroll written by hand rather than a printed book, and lighting the Sabbath lights with candles instead of light bulbs. 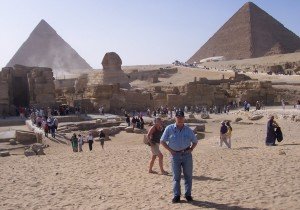 The meal should be accompanied with symbols

Yet, while preparations began on the symbolic tenth day, the highlight, as one would expect, came during the hours just before the exodus, (8) on the fourteenth day before evening, at dusk. The people were commanded to (9) place blood on the sides of their doors at that time.

Blood symbolizes life. The use of the blood served as a symbol to the Israelites of their severance from the indignities of the past and the beginning of a new life, even as the shedding of blood at the circumcision welcomes the new born infant into the Israelite fold. By placing the blood on their door-posts, the boundary between the Israelite home and the outside world, the Israelites were reminded of this message at least twice daily, as they left and entered their dwellings, before secluding themselves in their homes prior to the onset of the tenth plague.

This is also why slaves who opt to refuse to listen to the law that allows their release and who insist on remaining as slaves, have their ear pierced at the door post so that they can constantly be reminded of their shameful decision. And, if they were sufficiently schooled, they would realize the ironic difference between the blood from their pierced ears and that placed on the door posts by their ancestors.

Exodus 12:23 states that when the Lord “sees the blood upon the lintel and the two side-posts, the Lord will pass over the door” and not allow any inhabitant to be killed. Clearly this statement was not intended to be taken literally. The blood was not placed on the doors to aid God in identifying Israelite homes. God, who knows all, does not need to have blood placed on a door to know that the dwellers are Israelites. Hadn’t He previously saved the Israelites from plagues without the need for marked doors? Besides, if the purpose was identification, why use blood? The 12:23 statement is a figure of speech meaning that no Israelite child will die that night.

Special foods must be eaten with the lambs

The festive food, as stated, was the best, the tastiest, the traditional Israelite manner of celebration. Thus the people were told to eat the lamb with the best kind of bread, (10) matzot, unleavened bread, and season the lamb and make it tasty with (11) sharp herbs.

The traditional view is that unleavened bread is poor bread consumed because the Israelites had to rush out of Egypt without time to allow the bread to rise, and bitter herbs recall the bitter toils of slavery. This idea is problematic. It is clearly inapplicable to the pre-exodus celebration. The Israelites were commanded to have unleavened bread at the festive meal some days before the tenth of the month, more than sufficient time to bake leavened bread.

Arnold Ehrlich suggests that the ancients considered leavened bread inferior to matzot, unleavened. He points out that Abraham in 18:6 served his three guests a sumptuous meal that included ugot, and ugot are unleavened bread, as indicated in 12:39, where Scripture states ugot matzot. Abraham had ordered that an animal be taken from the herd, slaughtered, cooked, and prepared for his guests. This takes time; time enough for the leaven to rise. Similarly, Lot gave his guests matzot in 19:3. Both Abraham and Lot certainly had leavened bread at home, yet they offered matzot with the elaborate meals they gave their guests. King Saul was also served a sumptuous meal in I Samuel 28:24 with unleavened bread. This explains why leavened bread was prohibited with sacrifices that were burnt on the altar for God (23:18 and Deuteronomy 16:3); only matzot were offered to God because it was the better bread.

Thus, the bread used at the pre-exodus celebration was matzot. However, the matzot of the post-exodus Passover marked another event unrelated to the 12:1-11 festivity. Ehrlich does not discuss the issue, but the current association of matzot with leaving Egypt in haste, is based on 12:34 and 39. The Israelites had matzot for the festive meal, but they failed to prepare food for their journey from Egypt. So they “took their dough before it was leavened” (12:34) and left in haste with unleavened bread “because they were thrust out of Egypt, and could not tarry, neither had they prepared for themselves any victual” (12:39).

Bitter herbs was also not a symbol of servitude, but a spice, like salt and pepper and garlic, a condiment used by free people to enhance the flavor of their meals.

The final food rule was that the people should not be concerned about the morrow, (12) but to eat and enjoy and leave nothing until morning.  People who really relish their food finish it. This foreshadows the same rule with the same purpose regarding the manna in the desert.

Another requirement for this special celebratory meal, spelled out nearly a week prior to the exodus, was that the families should (13) gird their loins, wear shoes and take their staff in their hands. These institutions most likely symbolized the purpose of the meal, the celebration of the forthcoming exodus. It might also have served as a metaphor and meant be ready for the announcement to leave. Or it may have been part of the actual preparation to leave. The first or second explanation seem more likely since the announcement did not require more important preparations such as packing and the herding of the animals.

Thus the Exodus 12 Passover activities were unlike all subsequent Passovers. It had a different agenda. It was a joyful family or neighborly meal in which the Israelites demonstrated how happy they were that they would soon be free. In contrast, the purpose of subsequent Passovers was to recall the exodus event.