The biblical book Ruth is one of the most delightful books of the Bible. Jews read its four short chapters, totaling only 85 sentences, entirely each year in synagogues during the holiday of Shavuot, known in English as Pentecost. Christians do not read the book during their services, which pleased some ministers and priests who feel that the book cannot be appreciated by reading isolated passages; the story must be read as a whole to be appreciated, for it is one of the best stories in the Bible.

Dr. Campbell explains the story, its history, and the meaning of its unusual practices excellently. He addresses more than a hundred items, such as the story may not be true. This should shock no one because many parts of the Bible were written as parables to teach lessons. The Jewish sage Moses Maimonides (1138-1204) wrote, for example, that the book of Job and the story of Adam and Eve in the Garden of Eden are not true experiences. 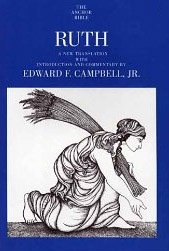 The general theme of Ruth is hesed, a word that reappears several times in the tale. It signifies “doing more good than is required.” Thus, after Naomi and her two daughters-in-law spend about a decade together, Naomi decides to return home to Judea after the death of their three husbands. Ruth and Orpah, the wives of her two sons, say they want to accompany her, even though they are Moabites and Judea is a strange land to them. After much discussion, Orpah decides to stay in Moab, but Roth resolves to join her mother-in-law in Judea. Orpah showed that she was an excellent daughter-in-law, but Ruth went beyond excellent and demonstrated hesed. Later, Boaz will show Ruth hesed in various ways, including marrying her.

Is God directly involved in the events that occur in Ruth? Did he cause the famine, stop it after more than ten years, cause Naomi to want to return to Judea, make Ruth to want to join Naomi, induce Ruth to glean barley in Boaz’s field and him to want to marry her? The book tells us that the people thought so. Campbell states that God is involved in the events in the shadows. This could mean no more than that the people thought God was directing them, but actually they made their own decisions by using their free will and intelligence.

There are two other significant questions about the story. Did Ruth convert to Judaism when she decided to return to Judea and why are there three different types of redemption stories in the Bible? In 1:15, Naomi pleads with Ruth not to accompany her to Judea, but to return to Moab: “Look, your sister returned to her people and her god.” Roth replies that she wants to go with Naomi, Naomi’s land will be her land and “your God is my God.” Is she saying that she wants to convert to Judaism? In all likelihood, no. Conversion is not mentioned. Nor is any ceremony mentioned. Ruth is simply responding to Naomi who said that Orpah is going to her god, and states that she will go to Naomi’s God. In ancient days, people thought that each land had its own god who controlled the land. Ruth said she would go to the land of Naomi’s God. Furthermore, later, Boaz praises Ruth for all her deeds of hesed and does not mention that she converted, which we would have expected him to do if this occurred. He says only, “You forsook your father and mother and came to a people that you did not know previously.” The concept of conversion to a new religion did not exist at that time, and was probably first introduced around 150 BCE by the Hasmonean king John Hyrcanus when he converted the Edomites to Judaism.

There are three distinct procedures in the Bible concerning marrying a widow who is left without children. Genesis 38 relates that Judah married his son to Tamar, and a second son when the first died, and he was unwilling to give his third son to Tamar. He told her to wait. But then he, Tamar’s father-in-law, was tricked into having sex with her. This relationship produced two sons and this apparently satisfied the widow procedure because there is nothing further stated about Tamar needing to marry the third son.

The second version of the widow procedure is in Deuteronomy 25:5-10. The Bible states the law that requires only a brother, no other relative, to take the dead brother’s wife if she has no children. Deuteronomy spells-out a practice, later called chalitzah, whereby the brother can evade marrying his sister-in-law if he does not want her, a procedure Judah did not know, otherwise he would not have told Tamar to wait for his third son.

In Ruth the two systems of taking and chalitzah exists, however a more-distant relative performs the marriage, not a brother or father-in-law. Additionally, the taking of the widow is coupled with the need to redeem the deceased’s property. Campbell suggests, among other ideas, that the three different ways may reflect different local customs or the Deuteronomy law was the latest development. It was an attempt to reduce the requirements of the ancient custom, making it now apply only to a brother and without the need to redeem property. The revision also gave the widow a greater opportunity to marry a man she wanted.

Either of Campbell’s solutions is possible. However, it is interesting to note that the rabbis modified the requirement still further, a fourth variation. They freed the widow entirely by forbidding a man from taking his brother’s widow and requiring him instead to give the widow chalitzah.