Definition of religion tells us much

Merriam Webster, http://www.merriam-webster.com/dictionary/religion, states “religion” derives from Middle English, religioun, from Anglo-French religiun, and Latin religio: supernatural constraint, sanction; or the Latin religare, to bind, restrain, tie back, secure. The same root yields the word “ligament.” The first known use is as late as the 13th century.[1] This concept of “constraint” and “binding” is not how the Bible understands the relationship between humans and God. 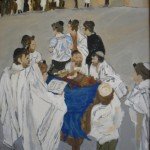 The concept of religion does not exist in the Torah and there is, therefore, no biblical word for it.[2] The Israelites were told by God, through Moses, that y-h-v-h was their God and they must do what he wants them to do and also not worship other gods. The relationship of Israelites and God was one of “covenant.” God, in essence, told the Israelites that if they did what he said, he would assure that all will be good for them, and the reverse if they disobeyed him.

People who understand that when Scripture announces that God said something, it means that this is a human insight into the true functioning of the world, would say that the Torah is teaching that humans must understand the workings of nature and act according to its design and avoid non-scientific practices (idols). If they do, they can be assured of good, if they do not, the reverse will occur.

Whether one takes the traditional or non-traditional approach to the Torah concept, one can see that contrary to the modern notion of the relationship to God being “binding” individuals and making them passive, the Hebrew Bible demands knowledge of God’s (or nature’s) requirements and actively using this knowledge to improve one’s self and society.

[1] Dr. Jack Cohen reminded me of the definition of religion and this prompted me to write about it. The picture is a painting by my wife Dina Drazin.

It is absolutely necessary to spend some times, as Socrates taught in Plato’s books, in defining what one is talking about, for a full understanding of the meaning of words can be very enlightening. Additionally, when people converse with one another, they frequently use words with different understandings of what they mean.

[2] Modern Hebrew uses the term dat, which is literally “law” and which fits the explanation of the relationship between humans and God described below.