Chapter 1 of my upcoming publication, the Satire: “She Wanted to be Jewish” 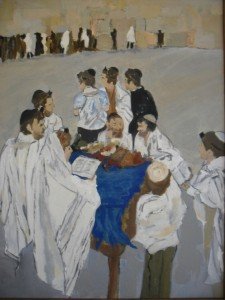 Sarah Shendel wanted to be Jewish

Six year old Sarah Shendel wanted to be Jewish. This is something she always wanted, ever since she was a child. Sarah Shendel’s father and two brothers were Jewish, but her mother Chisha Malka was not. Sarah Shendel had no sisters. If she had one she would have helped her sister become Jewish too.

It was obvious to Sarah Shendel that her mom was not Jewish. She could not read Hebrew and could not participate in the Sabbath singing. Chisha Malka spent hours preparing for the Shabbat meal, but so too did Valerian the maid, and Valerian was not Jewish. She wore a large cross around her neck, and was Catholic. Chisha Malka attended Shull and held a Hebrew Siddur in her hand but she could not read it. She had to look at other women to figure out when to stand, sit, and bow. Her parents had told her that girls do not learn Bible and Talmud and she had no need, therefore, to know Hebrew. She only knew the services were over because she saw the women get up and stop talking.

As far as Sarah Shendel could see none of the women in the women’s section of Shull were Jewish. They were kept apart from the men who were obviously Jewish. The rabbi did not recognize them as being Jewish, and he should know. Whenever the rabbi stood up to speak, he looked only at the men and spoke only to them. It was almost impossible for the women to hear what he was saying, surely because his sermon was not meant for them.

When Sarah Shendel heard what he said, it was always addressed to the men. And when he spoke about God’s commands, God’s mitzvot, which he did frequently, it was about things that the men should do. Sarah Shendel never saw the women do any of these mitzvot, and mitzvot were what God wanted. So God also saw that the women were not Jewish.

“Can I learn Hebrew?” Sarah Shendel asked her father, hoping this would make her Jewish. For Sarah Shendel was supposed to start school next week. The school was just for girls, probably to separate them from the boys because they were not Jewish.

“You will certainly learn Hebrew in school,” said her father.

The answer did not satisfy her. On second thought, Sarah Shendel was no longer certain that knowing Hebrew would make her Jewish. Wasn’t the priest who came to her father once a week to learn Hebrew a Catholic? Maybe when women learn Hebrew, they also become Catholic?

Sarah Shendel asked her brothers Yankel and Yitzchak, who were much older, seven and eight, about it. “You’re always asking ‘why,’ Sarah Shendel. You’re an apikores!”

“It’s a non-believer,” he replied. “Epicurus was a Greek philosopher.”

Sarah Shendel was sure she was not Greek. “It must be as I thought. Women are Catholics.”