A review of one of my books 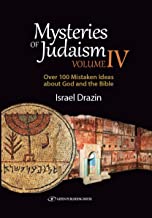 CHULA VISTA, California — Rabbi Dr. Israel Drazin’s latest book in his trailblazing series entitled Mysteries of Judaism IV;  Over 100 Mistaken Ideas about God and the Bible offers the reader a glimpse into this seasoned scholar’s views on many of Judaism’s most sacred beliefs concerning subjects as diverse as the importance of the creation narrative in the early chapters of Genesis, as well as many of the thorny problems emerging out of the creation narrative.  Examples include:

Christians might be surprised to know that “Christianity interprets Eve and Adam’s disregard of the divine command not to eat of a certain tree as ‘the fall of man,’ and the ‘original sin.’ They meant that these two individuals performed such a terrible act that it affected all their future offspring and people could only be saved from Adam and Eve’s sin by believing in Jesus who came to earth to save humanity from this catastrophe. Significantly, the Bible does not even hint of this idea and the early Christians knew nothing about it until Augustine (354–430) invented the notion.”

Rabbi Drazin is undoubtedly correct. In fact, the Celtic Christian theologian Pelagius rejected Augustine’s notion that man is born sinful from the moment of conception. He argued quite the opposite: Every human being born is as innocent as Adam was on the day of his creation; evil is not innate in man, but it exists because parents fail to model genuine ethical behavior.

On the question, “What is the symbolism of the serpent speaking in the Edenic narrative?” Rabbi Drazin pointed out that the answer depends on the commentator you study. He explains that Ramban (Nachmanides) insisted that the story of Adam and Eve is about a historical event that actually happened.” Furthermore, “The Edenic serpent was not a mythical character or a psychological symbol; it actually walked and talked. In contrast, Maimonides explains in his Guide of the Perplexed 1:2 that the Edenic story is a parable about human existence.

Rabbi Drazin sides with Maimonides. I would argue that his view is undoubtedly a position most modern scholars readily understand and accept. But it is amazing that many Jews and Christians still approach the story about the serpent as if it really did speak. Too many people no longer understand the mythic background of the story. This is where archaeology has greatly enhanced our appreciation of the Bible.

Rabbi Drazin also examines Ibn Ezra’s view that certain portions of the Torah were written long after Moses died, as we see through the biblical use of anachronisms. He also showed how Ibn Ezra influenced Baruch Spinoza, arguably, one of the first major biblical scholars who questioned the veracity of Mosaic authorship of the Pentateuch.

In another chapter, the author brings down the famous distinctions between R. Ishmael and R. Akiba concerning how we are to understand the Torah. According to R. Akiba every word, every letter, and probably every space is full of exoteric and esoteric meaning. Nothing is repetitive in the Torah, but R. Ishmael argued that Torah speaks in the language of human beings, and it is not uncommon for people to be redundant. In the Orthodox world today, the midrashic and mystical approach of R. Akiba’s interpretative approach to the Torah reigns supreme.

Other significant themes from this book include his section on the meaning of prayer. This is one of the most important questions that continue to perplex modern thinking Jews. Perhaps nothing says more about our personal relationship with the Divine than how we experience prayerful moments in our daily lives.  Rabbi Drazin concludes:

Rabbi Drazin is a Maimonidean thinker when it comes to prayer. It is worth noting that prayer, as we now understand, it allows us to realize our dependency on God and that we depend upon God for our daily survival. In the modern city and technological world we live in, we tend to depend upon our own cleverness when it comes to making ends meet. I am reminded of Bart Simpson’s Thanksgiving prayer that encapsulates this idea, “God, we paid for all this ourselves, so thanks for nothing!”.

But for the farmer who depends upon good weather for his crops,  ancient and modern farmers have always recognized that the success of his crop depended upon weather conditions that were entirely out of one’s control. The farmer knew that a severe rainstorm could cause damage to both his crops and freshly cultivated soil in a matter of minutes. Mildew, infestations of beetles, locusts, and other insects likewise can destroy a harvest. Droughts in agricultural and pastoral areas are often more damaging and widespread than brush fires. Early man’s keen sense of vulnerability led the farmer to rely on a Supreme Being who would look after him and his needs. However, today, fewer of us live off the land. One merely goes to the local supermarket and purchases whatever one needs. In the event of a shortage, the urbanite attributes blame and responsibility upon human agents. The Bible repeatedly warns us not to think we are responsible for the wealth that we have accumulated. Such an attitude comes close to denying God altogether in our lives. The Torah teaches,

“Otherwise, you might say in your heart, ‘It is my own power and the strength of my own hand that has got me this wealth.’  18 Remember then the LORD, your God, for he is the one who gives you the power to get wealth, by fulfilling, as he has now done, the covenant he swore to your ancestors” (Deut. 8:17-18).

One could argue that the most important prayer is that of gratitude, and for that reason alone, we pray.

Yes, as Rabbi Drazin observed the worshiper must always contemplate and meditate on one’s personal life as to how it relates to God.

Rabbi Drazin is an Orthodox Jew, but he believes one must approach Jewish tradition with an openness to the truth and that Judaism—even Orthodoxy—can survive and benefit from modern critical studies of the faith. As someone ordained as an  Orthodox rabbi, I greatly admire Rabbi Drazin’s fearless pursuit of the truth. In many ways, he reminds me of the British scholar Louis Jacobs, who also demonstrated a similar penchant for examining the canons of Judaic faith.

Such brave souls frequently receive stinging criticism. However, as Maimonides himself often said, One should not consider a statement true because you find it in a book, for the liar who will deceive with his tongue will not hesitate to do the same with his pen. Amateurs and unschooled persons tend to be convinced of the reliability of a statement by the mere fact that it is written; nevertheless, the accuracy of any truth must be demonstrable.[1]

The entire book of Mysteries of Judaism Vol.4 is one of those books that a beginner and a seasoned scholar will enjoy reading from cover to cover.

*
Rabbi Dr. Michael Leo Samuel is spiritual leader of Temple Beth Shalom in Chula Vista, California.  He may be contacted via michael.samuel@sdjewishworld.com