Why did the Bible only punish rapists with a fine?

The Fire and the Cloud

David Bigman’s
reflections on the meaning of the Torah are a pleasure to read. They are
sensible, intelligent, and interesting biblical interpretation, presented
clearly, orderly, and concisely, covering 54 different biblical portions in
just 160 pages. David Bigman is not only a rabbi familiar with his subject, but
the head of an academy, Yeshivat Maale Gilboa, in Israel. 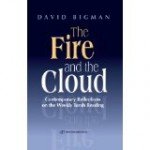 Contrary to many
Jews who are convinced that the interpretations and expansions beyond the
literal meaning of the Bible, known as the Oral Law, were part of the
revelation by God to Moses at Sinai, Rabbi Bigman, like Rabbi Binyamin Lau in
his book The Sages (see my review of
the book), recognizes that these were
later developments, explanations, and changes that were necessary and
appropriate for later times. He cites an ancient Midrash, which is a rabbinical
commentary on the Torah, which states that “even what a senior student will say
before his rabbi in the future – they were all related to Moses on Sinai,” even
though the idea originated with the student and Moses never heard it. Thus
Torah is not stagnant, humans help it expand. “Every aspect of Torah involves
tension between uncovering the truths concealed in the revelations of the
Torah, Prophets, and Writings, and uncovering the truths hidden in ourselves,
through our own creative involvement and interaction with God’s Torah.” This is
what Rabbi Abraham Isaac Kook, the first chief rabbi of the British mandate of
Palestine (1865-1935), called continuing revelation.

Perfect examples
of the updating of Torah are the laws of women who were seduced or raped. Rabbi
Bigman is almost outraged that Exodus 22:15-16
and Deuteronomy 22:29 state that if a
man seduces a woman, in Exodus, or
rapes her in Deuteronomy, he must
marry her, but if her father refuses the marriage, seducers and rapists pay a
fine. Bigman recognizes that current societies consider monetary payments for
these egregious acts immoral: “the Torah’s approach to rape reflects a legal
principle that was current in those ancient days.” But while the Torah accepts
this practice, it informs attentive readers that it is not the proper way to
handle the situation. This becomes clear in the reaction of Simon and Levi to
the rape of their sister Dinah. The brothers cry out to their father Jacob,
“Shall he (the rapist) make our sister like a harlot!?” (Genesis 34:31). Berger comments: “It was not the fact of Dinah’s
rape that made her into a harlot, but the willingness to accept money in
compensation for the terrible deed. The brothers’ powerful argument constitutes
a profound criticism of systems of law in which baksheesh can make good for the
pain and humiliation of rape.” Their complaint, the rabbi continues, “raises
difficulties with the Torah’s laws of rape and seduction: The biblical laws
might invite promiscuity,” for they seem to allow simple monetary fines for
heinous violations. Thus, while the Torah “adopts the accepted rule of monetary
compensation for rape and seduction…it sides with Simon and Levi’s principled
rejection of that practice…their outrage was founded upon a profound
sensitivity to injustice.”

Commenting on Genesis 1:1, the beginning of the Torah,
which states that the world was “unformed,” Bigman says that it is still
unformed in many ways, and people have a duty to remedy the situation and help
form it properly: “we do not know which of our actions will succeed, and
therefore we must remain active, always assuming that our current endeavor is
the most important of all.” Thus, there is a Midrash that contends that the
patriarch Abraham “could never be sure whether the divine promise was fulfilled
in Isaac (his son), making it necessary for him to father additional children.”

What was wrong, he
asks in another short essay, with the people at the Tower of Babel speaking one
language, which prompted God to make them speak in many tongues? If everyone
spoke the same language wouldn’t there be no quarrels, no wars, peace? He
explains that people have a responsibility to grow, and growth “is founded upon
culture and creativity, and the differences between languages and between
people form fertile soil for renewal,” stimulation, and growth.

The rabbi examines
many other subjects. He notes, for instance, that Isaac’s birth was surrounded
by the laughter of his father Abraham and his mother Sarah, and that he was
named Isaac because his name means laughter, and Bigman writes out that the
Torah is emphasizing the need for laughter and joy in life.

These are a few
examples of the cool, invigorating, fresh air that Rabbi Bigman brings into
Torah commentaries.